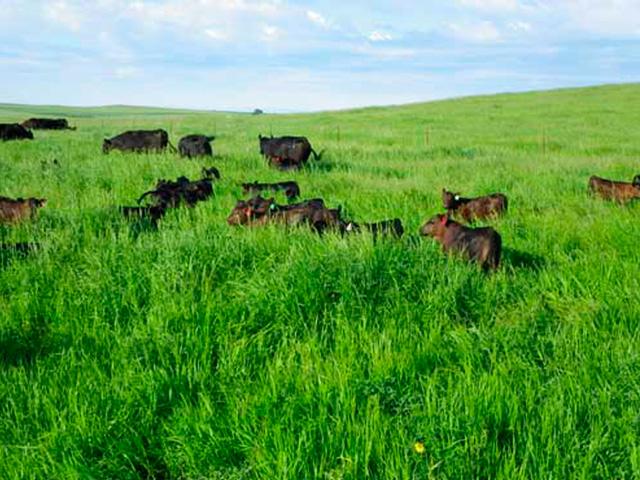 Adaptive grazing is different for every operation. On the Gabe Brown family ranch in North Dakota it normally takes about a year for a paddock to recover enough to be grazed again. (Photo courtesy Browns Ranch website)To Gabe Brown, it was just another film crew when Peter Byck's group showed up at the family's North Dakota ranch to work on a project about adaptive grazing. It's turned into something much larger.

Today Brown travels the world to share how adaptive grazing, also known as regenerative grazing, is a science-based approach that has helped his operation become more profitable, and more productive. It's all thanks to the carbon, which has improved soil quality and greatly increased water infiltration.

Brown says: "Those of us using adaptive grazing practices have known for a long time that the bad rap beef is given is only based on one model of productionâ??and it's not ours. All beef production is lumped together in the eyes of the public. Yet there are many ways to produce beef. This film shows that. It explains how what we do mimics nature. And that is the difference."

Byck just launched the new, full-length film based on his documentary series "Carbon Cowboys". The film was recently screened by the Smithsonian and is an all-new look at how carbon levels in soils can be positively influenced by farmers and ranchers using regenerative practices.

The Carbon Cowboy film was made in collaboration with Arizona State University and The World Food Bank. Byck noted he came into the project looking for solutions to climate change. He founded Carbon Nation as a nonprofit back in 2007, releasing a feature-length documentary on the subject in 2010.

Byck said: "Many of the farmers I've filmed aren't doing this because of climate change, they're focusing on their soils' health for their family's livelihood. But if the farmers can help solve climate change because it's profitable -- that works for me."

North Dakota's Brown explained adaptive grazing is a process of grazing and moving cattle from paddock to paddock, providing ample time for the land to recover between grazing. It's a constantly changing program, tied to region, weather and forages. One of the goals is to create a competitive feeding environment, allowing a mixture of forages. Cattle feed much as bison did in the past. What works on one ranch, or even in one season, won't necessarily work anywhere else.

In the South, for example, Brown said grassland may need to rest 40 to 60 days between grazing. In North Dakota, however, he more typically will give pastures 12 to 14 months to rest. For him the approach has tripled the amount of organic matter, or carbon, stored in soils. That is based on soil tests he regularly does to track his progress. Over 8 inches of rainfall per hour can now infiltrate the carbon-rich soils here on this ranch.

"In years where we have ample moisture, I might be able to re-graze an area in 8 months," Brown added. "But in a dry period, it could be two years. That's the key to being adaptive, you respond to conditions, not a management plan."

Brown said today the ranch, located just outside Bismarck, includes about 5,000 acres. They run 1,000 head of beef, as well as sheep and some pasture hogs. They also keep 1,400 laying hens, broilers and turkeys and they grow cash crops, including corn. They are part owners in an abattoir, where livestock can be processed and marketed directly to consumers. Like most direct-sale operations today, Brown said they are working nonstop to keep up with buyer demand.